The Countdown to Christmas has well and truly begun, and we’re celebrating the unique gifts that our sellers all around the world create. In a series of three short videos, we take a closer look at the maker and the process behind a one-of-a-kind gift. Today it’s the turn of Molly from Little Goodall whose creative children’s coats will fire the imagination of countless little ones this Christmas.

Goodall started her Etsy shop, Little Goodall, in 2010 after making a creative coat for her two-year-old son to try and encourage him to keep his hood up. “I was frustrated because I couldn’t find really cute, creative clothing for him to wear, and so I had this crazy idea for a lion coat,” she says. “I made it for him thinking that he would wear his hood up if it was a little bit more interesting.”

A former toy designer who studied fashion at New York’s Parsons School of Design, Goodall could never have predicted the success her shop would have; her beautifully constructed animal coats have made their way from her North Texas home to excited little recipients across the globe, as far away as Australia, Qatar and South Korea.

Despite it’s success, the business still remains very much a family affair. Molly’s father – who has a shipping background – helps with inventory management in the spare bedroom, which also acts as stock-room during busy periods. In the dining room (packing room at this time of year!) the entire family including Molly’s mother and husband set up a production line, packaging each coat with the utmost care.  “We take a lot of pride in the way that we pack [the coats],” she says. “Everything is in tissue paper, the box has been tied with a grosgrain ribbon and there’s a note that I write on a little card in each one, thanking the customer. We try to make it a really memorable moment whenever someone opens the box, so that it feels like they’re really opening something special.”

Molly’s now five-year-old son remains her muse. “He likes to get involved in the design process and make drawings of what he thinks things should look like,” Molly says. “He’ll start cutting pieces of felt and gluing buttons onto his little collaborations.”

One of Molly’s favourite things about selling on Etsy is the sense of connection with her customers. Some order from her every year, and others send her photos of their children in the coats as they grow. “[The coats] are like well-loved stuffed animals. The older they get, the more personality they have,” explains Molly. “The big kids hand them down. One of my customers, she said, ‘My younger daughter just inherited the lion coat this year and she’s so excited that it’s her turn for it!’” 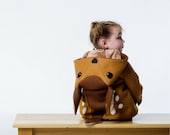