The Jewelry Lover’s Guide to Birthstones

Quick: Can you name your birthstone? Whether you’re at a loss when it comes to your signature jewel, vaguely aware, or proudly rocking it every day, there’s something special about getting to know the precious stone that’s been traditionally associated—sometimes for centuries or millennia—with the month you came into the world.

And there’s no better time to dive in: Today’s birthstone jewelry has evolved beyond the cookie-cutter trinkets of our childhoods to encompass a world of unique pieces that make it easy to express your individuality. Up-and-coming trends in the birthstone sphere—chic ring stacks, updated stud earrings, unorthodox engagement jewelry, and edgy settings—keep modern birthstones feeling fresh and relevant.

To celebrate the treasure trove of beautiful options available on Etsy now, we’ve put together a guide to the year in gemstones, complete with a collection of distinctive designs you’re guaranteed to fall in love with—no matter which of the twelve months you call your own. 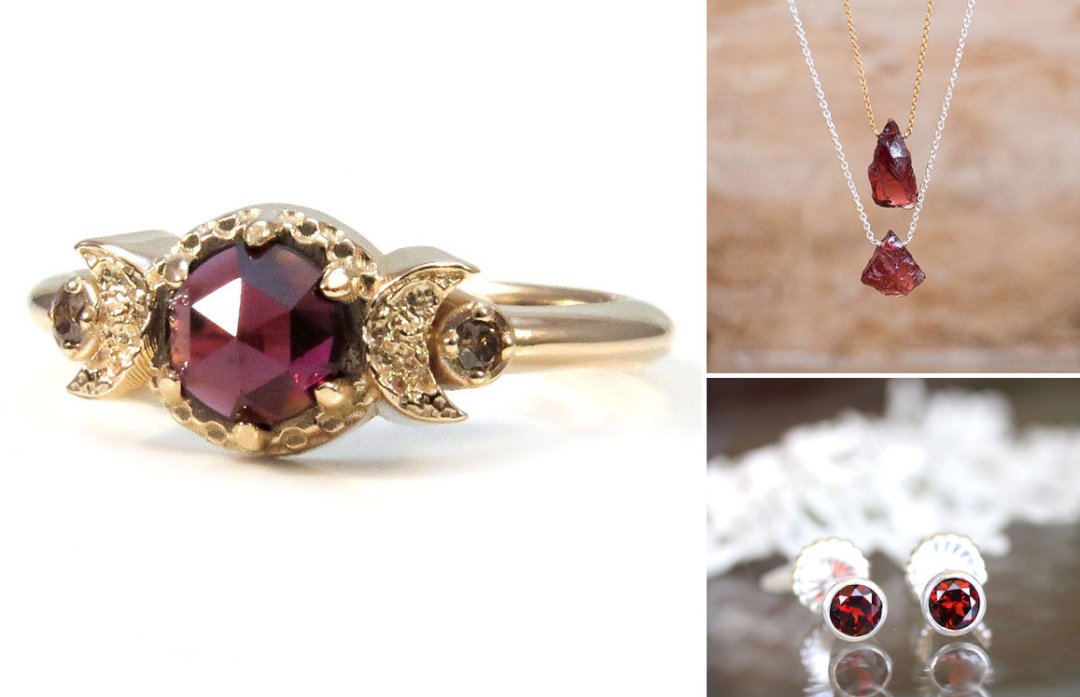 Prized by ancient Egyptians and Greeks for their luminosity, and also considered a hot commodity in the Victorian era, garnets come in many colors—though the most popular, red, is the hue most often associated with January birthdays. Today, most garnets are sourced from different parts of the African continent, like the Mozambican stones in Abiza Jewelry’s rough garnet necklace. A particularly scratch-resistant stone (they score highly on the Mohs’ scale, which ranks stones’ hardness), these beauties are an ideal option to wear either raw or cut. 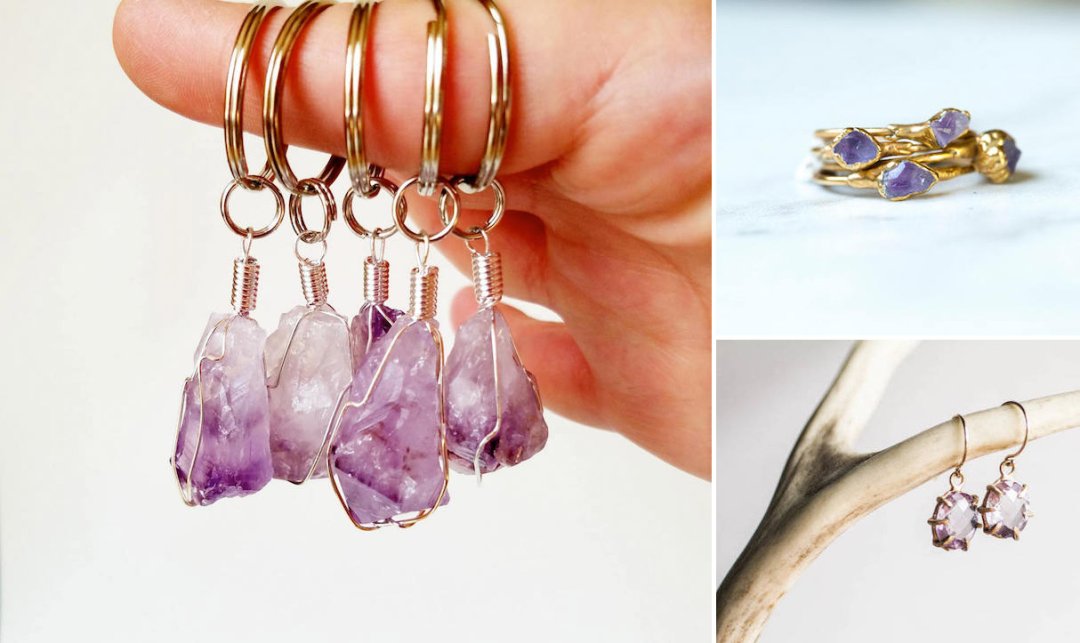 Though February babies are tied to the most romantic season on the calendar, their birthstone, the amethyst, is in fact associated with chastity (so much so that it stands as the jewel of choice for Catholic clergymen’s robes). While all gemstones are unique, the idiosyncrasy of individual stones is especially noticeable with amethysts, which change color when they’re exposed to heat. As a result, some amethysts are naturally multicolored, and can appear to have a different tint depending on the time of day (and may even appear to be translucent). The natural variety in amethysts makes them perfect for tonal layering. Stacking rings—like these uncut textured bands from Ringcrush—can display a widely varied spectrum of violet hues in a single set. 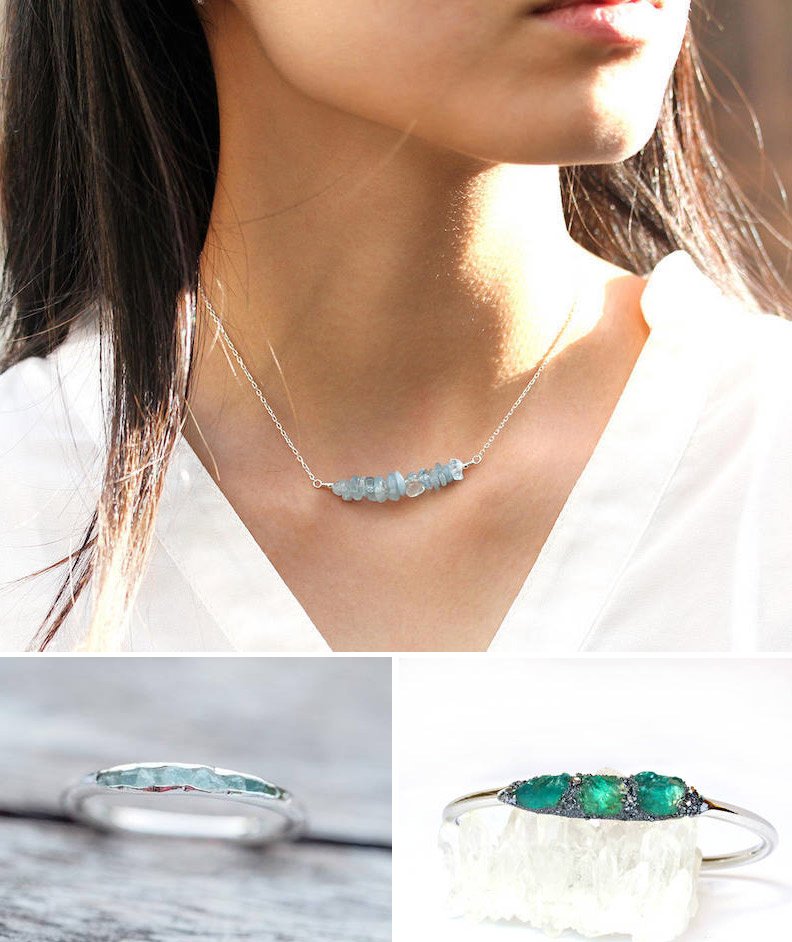 If bigger, flashier jewels are your thing, and you happen to have been born in March, you’ve struck gold—or, rather, aquamarine. Your birthstone is known for its exceptional clarity—which means that large statement rocks look flawless when cut from this gem. But that’s not to say that the minimalist won’t also find their match with this stone. Sure, the largest aquamarine on record clocks in at a whopping 245 pounds, but the cool blue jewel, thought to have a calming effect, also looks fab in less showy forms: just a sliver of the stone forming the centerpiece of a ring, for example, or a row of discs arranged neatly on a delicate silver strand. 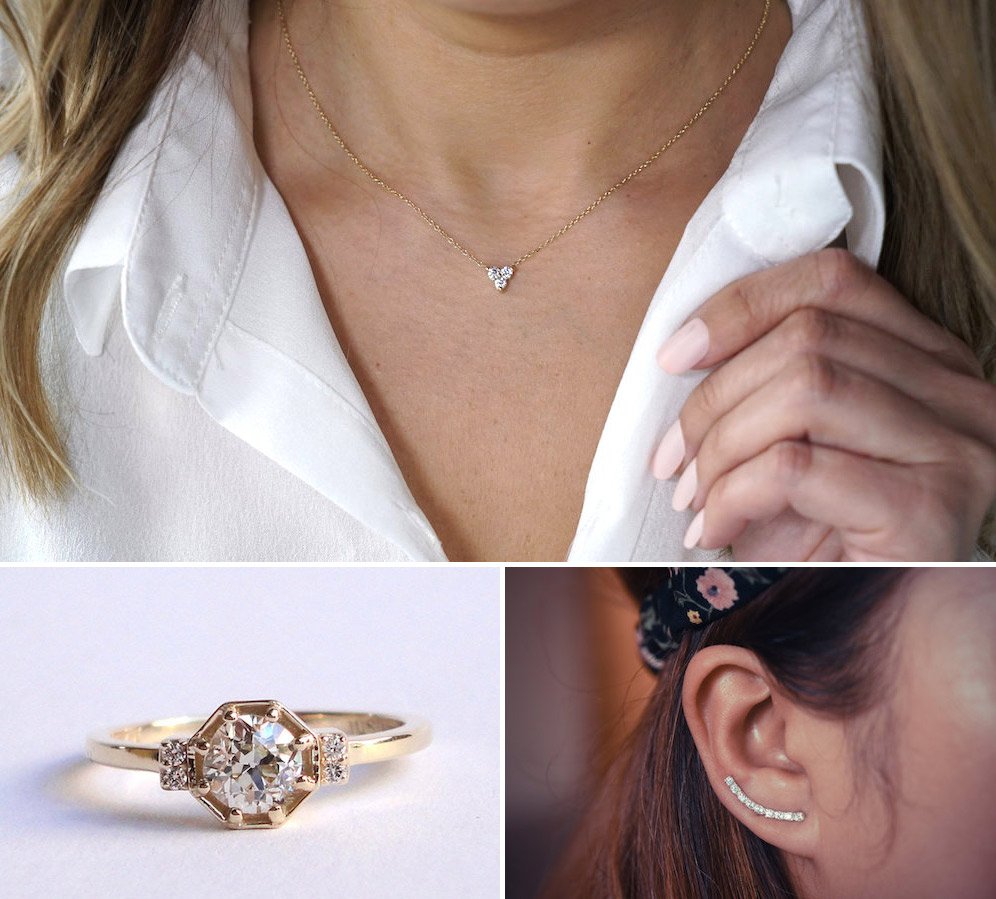 Everyone wants a piece of the diamond—you might have heard that they’re forever?—but those lucky ones born in April have a particular claim on the most glamorous gemstone of all. So what makes a diamond so special? For starters, it’s extraordinarily pure, since it’s the only gemstone composed of a single element: carbon (trace elements present in some diamonds are not considered part of the stone’s makeup). It’s also the hardest naturally occurring substance on earth, famously impervious to scratches from anything but another diamond. But perhaps the best part of making a diamond your best friend—whether you’re committed to a classic solitaire engagement ring or prefer to use the stone to add a touch of luxury to a casual look—is the daily reminder that toughness and sparkle can, and do, coexist beautifully. 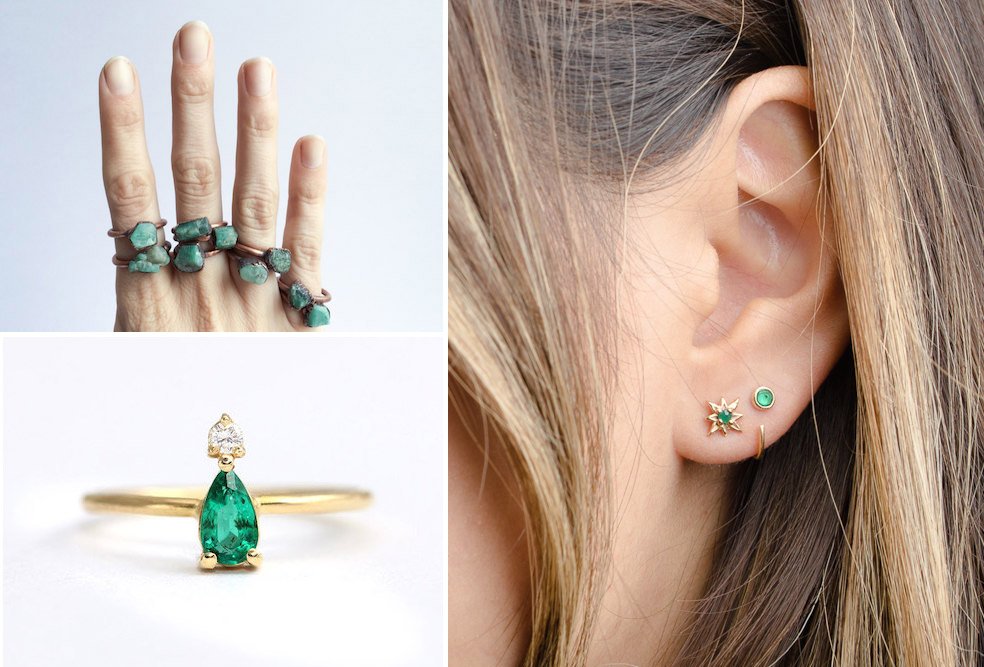 Diamonds might have the rep for being the finest of the jewels, but any queen knows her collection isn’t complete without an emerald. Just ask Cleopatra, who was famously obsessed with the rare green gems, or Queen Victoria, who gave her husband Albert major props when he gifted her an epic emerald tiara in 1845. Jewelers say that top-shelf emeralds edge out diamonds in value, even though one of the stone’s signature characteristics is its minute individualized fractures (known as inclusions, or jardin, from the French word for garden). Today, emeralds are sourced from all over the world: Countries as wide-ranging as Brazil, Pakistan, Colombia, Zambia, and Russia all have sought-after mines. For a less traditional take on the classic stone, try an unpolished emerald (like HAWKHOUSE‘s raw emerald ring set), which has an effect similar to jade, but in a deeper green hue. 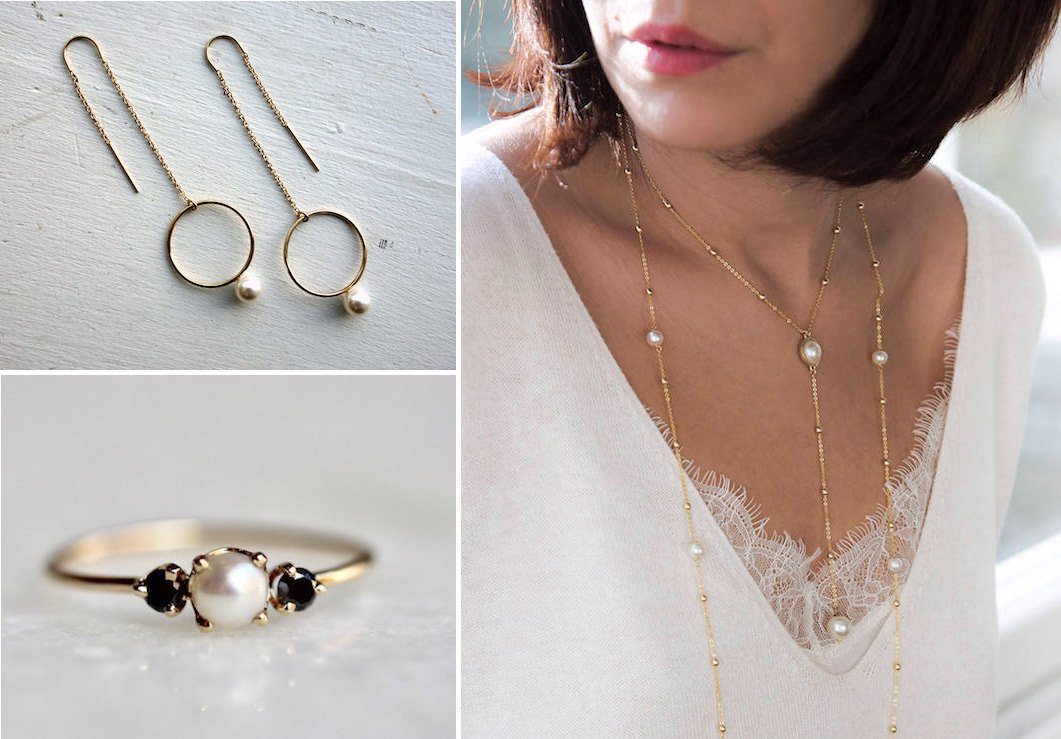 By definition, no precious gem is going to be easy to come by, but pearls surely set the bar for effort. They are the only birthstone material produced by a living animal after all, and have been duly admired and coveted for millennia. Natural pearls, found in one out of every 10,000 wild oysters, are the rarest of the rare, but even a single cultured pearl (made with human intervention) takes four years to produce. Like the diamond, the pearl is a staple even for those not born in June. Make yours stand out with an unexpected presentation, like this striking rose gold layering necklace set from Atelier Petites Pierres. 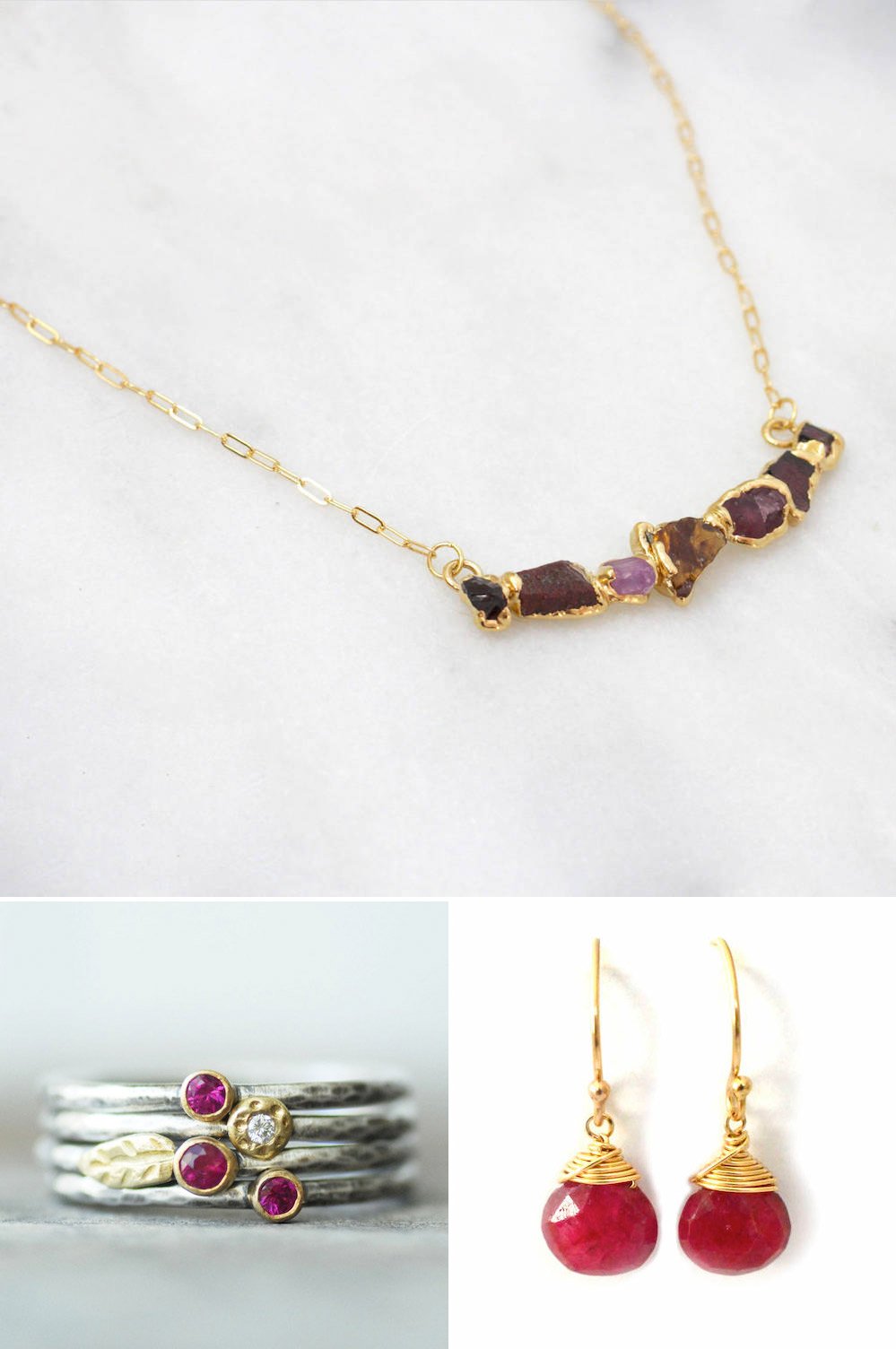 It’s no fluke that rubies are common symbols of royalty—the ancient Sanskrit word for ruby is ratnaraj, which translates to “king of the gemstones.” It’s one of the hardest gems on the planet, and holds up well against heat, which is often applied to the raw stone to bring out its clarity and reveal its truest, brightest red. Rubies, along with sapphires, are a variety of corundum, a mineral that’s actually colorless; the signature ruby red is the result of traces of chrome interacting with the corundum. Feel free to slip on rubies in sparing doses: That rich natural vibrancy means that even a small piece makes a big impact. 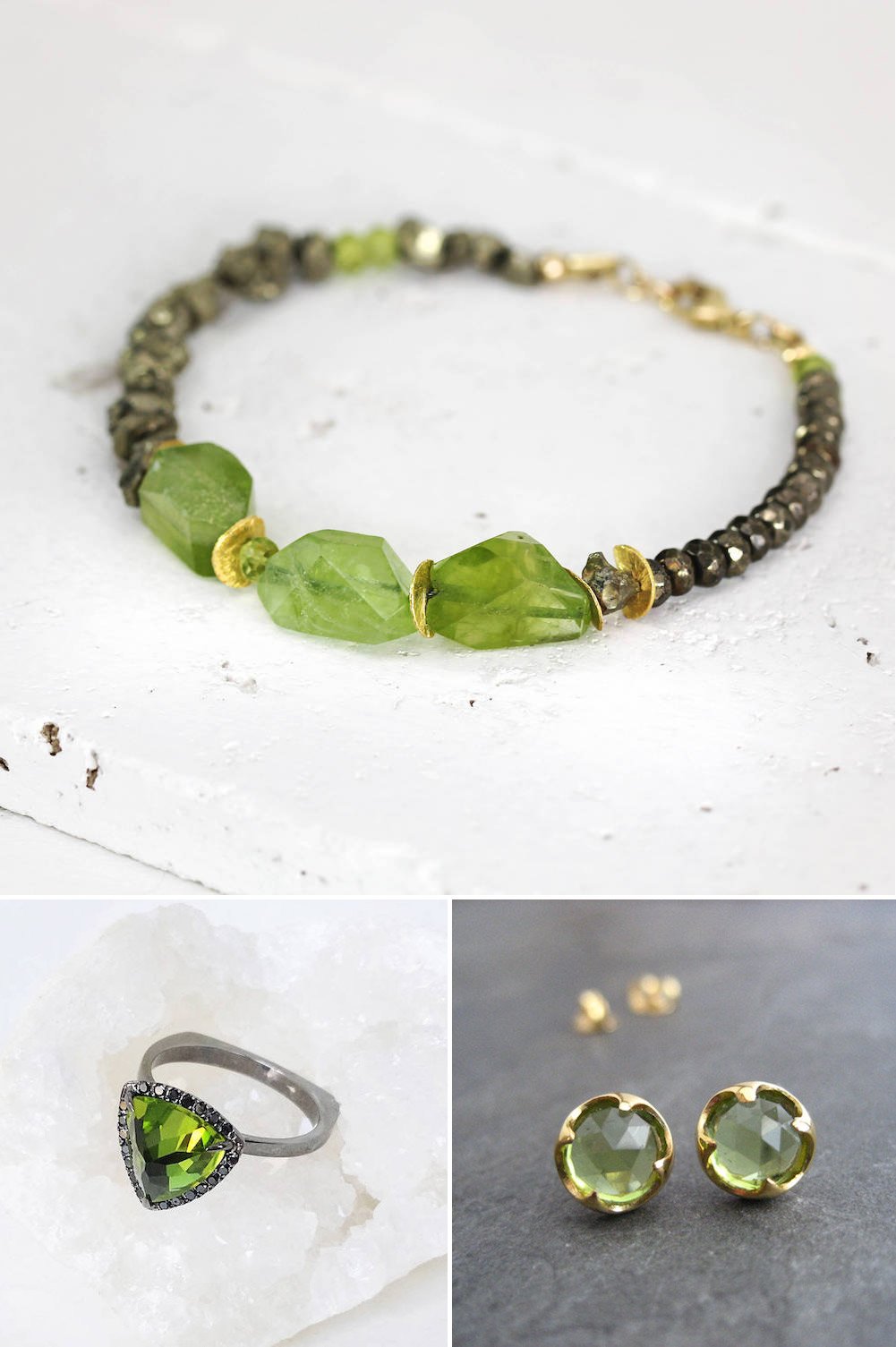 Historically, peridot has been found in some of the dreamiest spots on the globe: Egypt and Hawaii were long lauded for their peridot reserves. The coolest source, however, has got to be outer space. That’s right: The stone has been found in a particular variety of meteorite that makes its way, on occasion, down to Earth. (That means August babies are the only ones who can claim a truly out-of-this-world birthstone.) Despite its impressive provenance, peridot is not the toughest gemstone around, and can be susceptible to scratches—but its singular, summery yellow-green shade is destined to leave a lasting impression on all who see it. 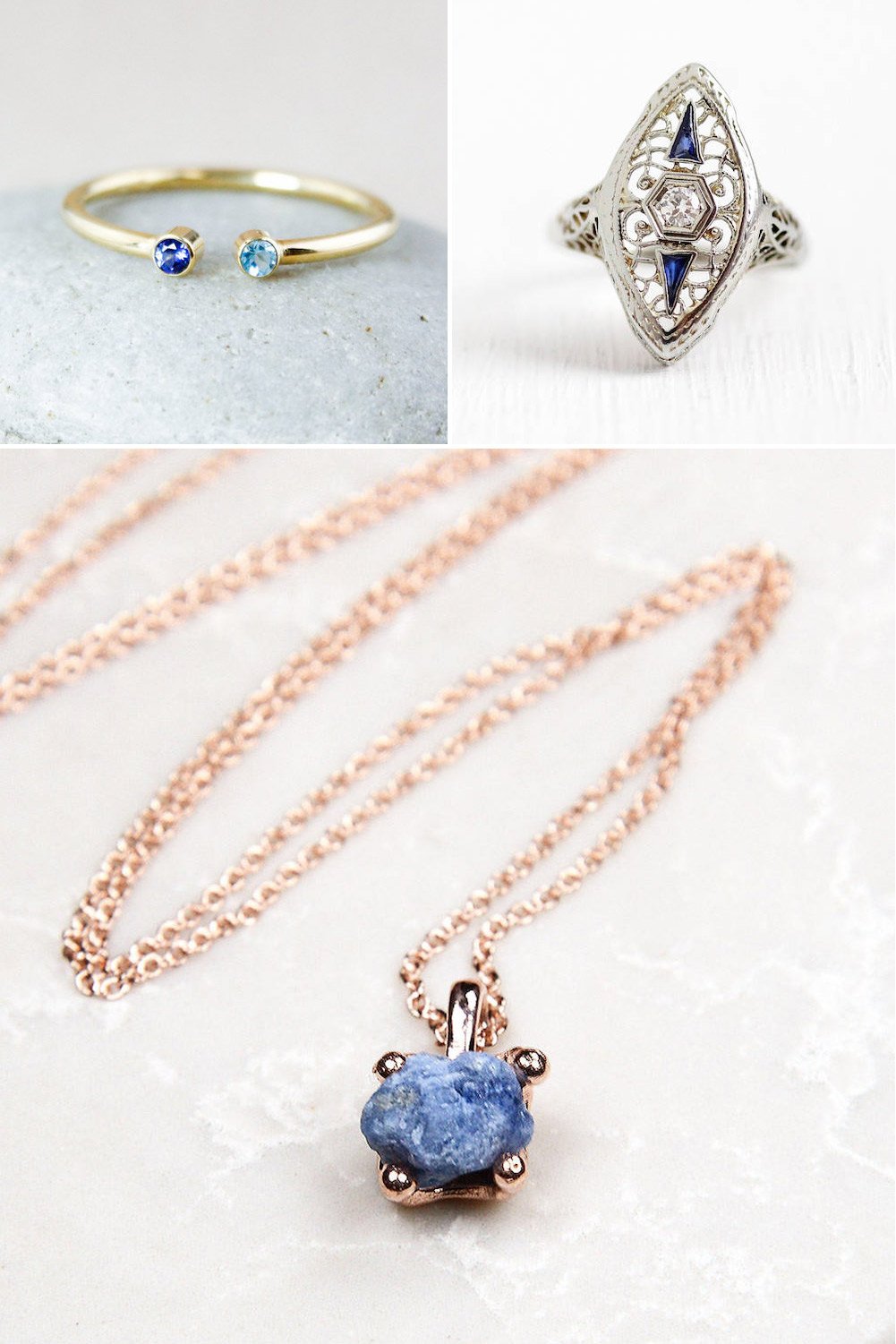 Like rubies, sapphires actually come in a rainbow of tones, and some rare varieties even change color with the light. But the most famous shade to this day is classic, deep-ocean blue. Sapphires typically have fewer inclusions than other gemstones, and in many cases that exceptional clarity translates to showstopper pieces. In fact, sapphires are one of the most popular alternatives to diamonds for engagement rings—the most famous example of which, Princess Diana’s ring from her engagement to Prince Charles, got a second turn in the spotlight when Prince William used the same ring to propose to Kate Middleton in 2010. 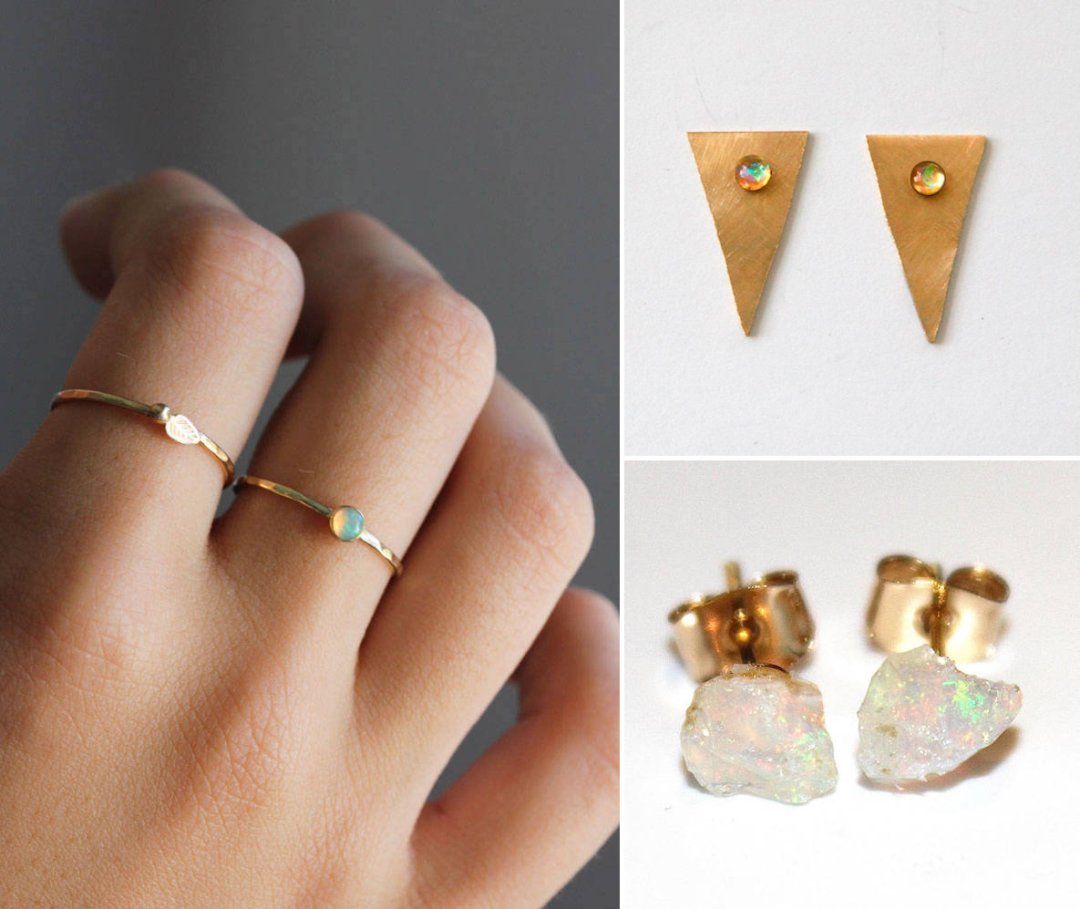 Both in their formation and their ultimate appearance, opals are one of the most unusual stones. Most opals on the market today come from Australia, where they form when silica, a colorless compound, transfers into underground rock deposits via rainstorms. There are several different categories of opals, with a geological effect known as play-of-color occurring across many; the rainbow-like effect is especially stunning in raw stones, like these dazzling uncut stud earrings from Frizz Candy. 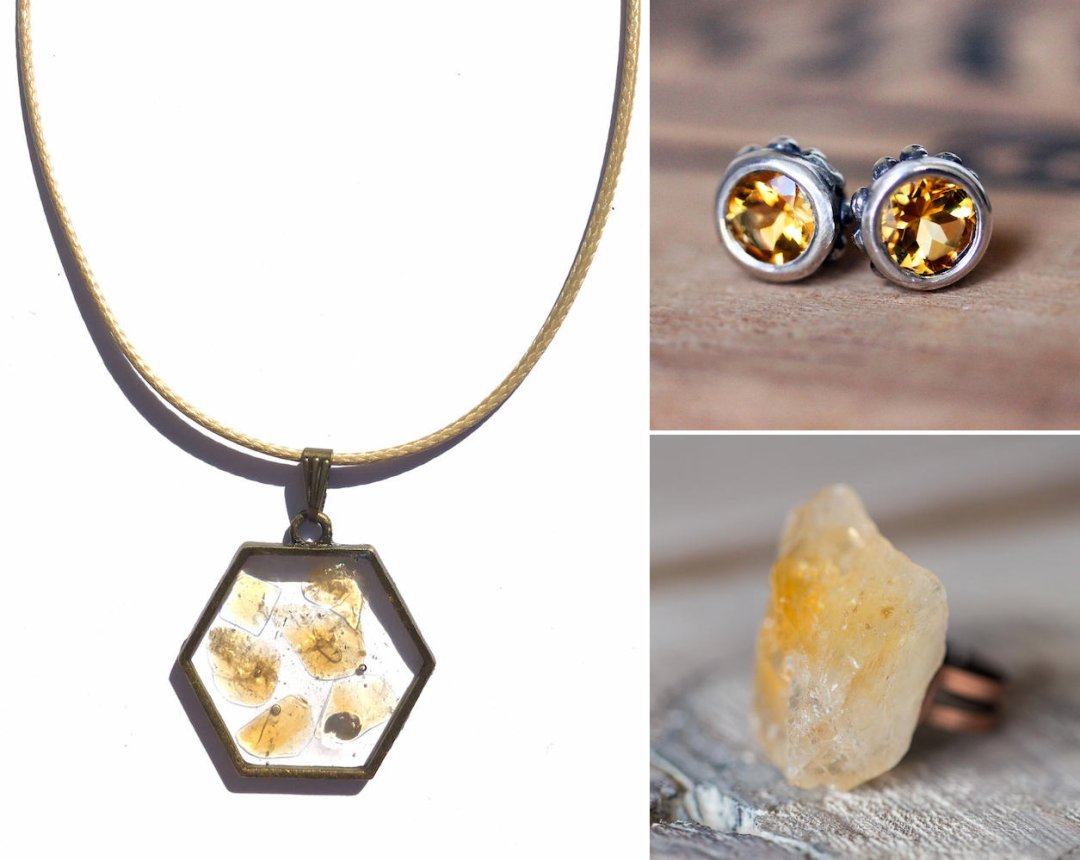 Fun fact: Citrine’s perfectly autumnal yellow-orange hue is actually a rarity in nature. Though there are spots in Russia’s Ural Mountains and Madagascar where naturally occurring varieties of the stone can be found, most of the citrine available today is actually a heat-treated version of amethyst. But there are a couple of major upsides to the heat treatment method—a deeper, richer coloration, for one, and also a more durable stone. Because of its toughness, citrine works especially well in larger pieces. Case in point? This eye-popping statement ring from daimblond. 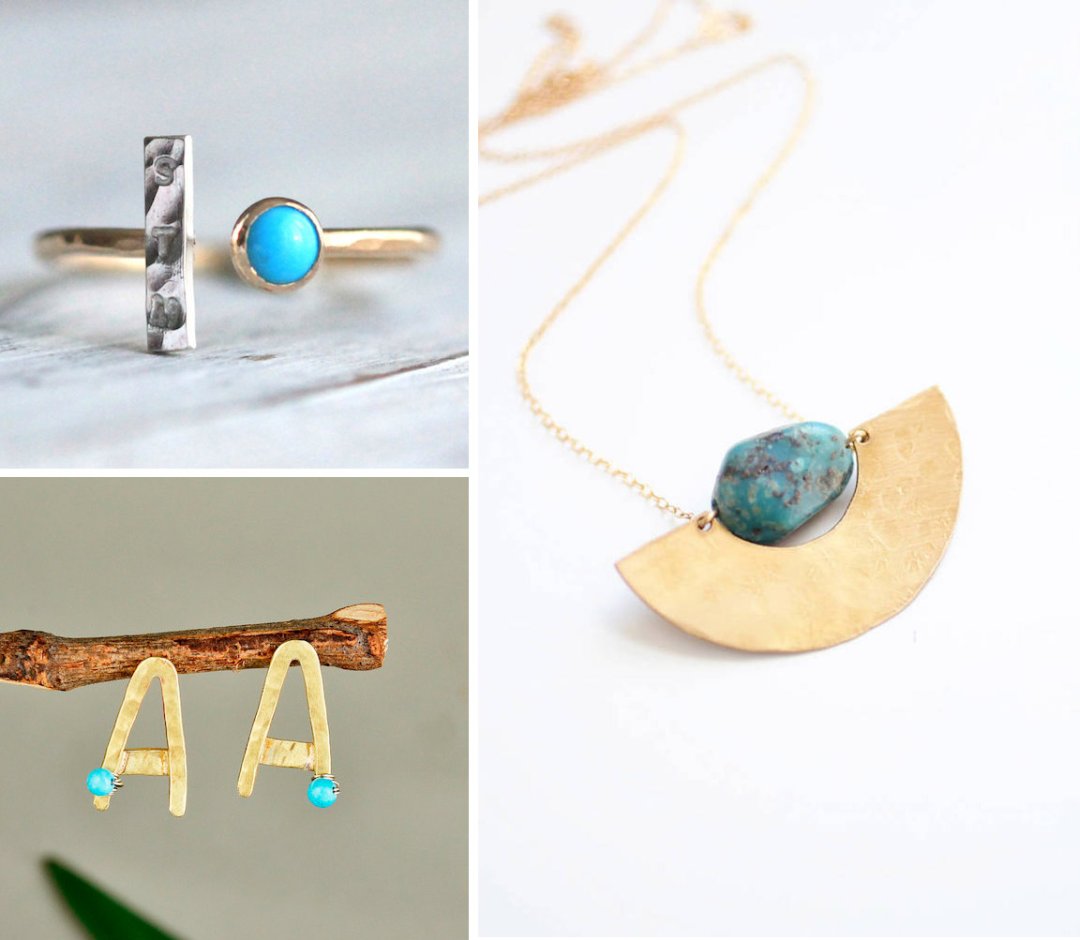 Long treasured by cultures spanning the globe, from the Aztecs to Native North Americans, turquoise is a stone whose close connection with nature is often reflected in its designs, and whose innate softness and malleability make it a dream for artisans to shape. Even without any elaborate carving, turquoise’s natural formation process can leave one-of-a-kind markings (or “matrix”) on the stone. The most valuable turquoise is matrix-free (read: a pure, almost electric blue), but many jewelry lovers prefer the distinctiveness of the natural matrix patterns. One downside of turquoise? The stone’s softness means it must be carefully looked after if not pre-treated with wax or resin for durability.

Using unexpected designs and clever color combos, these makers and curators are putting stylish new spins on our favorite gemstones.

A Jewelry Lover’s Guide to Turquoise

End the year in style with December’s on-trend birthstone. We’ve rounded up five fresh finds sure to leave a lasting impression.