From the Mona Lisa to the Girl With the Pearl Earring, the most famous women in visual art haven’t typically been women artists but the subjects, almost inevitably, of male artists. Women may have provided the inspiration, but men made the art—and by doing so, took ownership of female beauty and representation for centuries. Of course there are exceptions, from medieval polymath Hildegard of Bingin to Qing dynasty painter Chen Shu; works like the Baroque masterpiece Judith Slaying Holofernes by Artemisia Gentileschi present a fascinating, women-centric visual world. But a trip through any major art museum will confirm the dominance of the male gaze. It’s been refining the female form for centuries, and it’s not giving up without a fight.

Consider this a beautiful rebuke to all that. This International Women’s Day, we’re celebrating the work of six women artists on Etsy, all of whom feature women prominently in their art. From borderline surreal scenes with determined female protagonists to abstracted celebrations of wrinkles and curves, these artists’ works are as unique and compelling as the women represented within them. Scroll on to discover your next favorite artist, full stop. 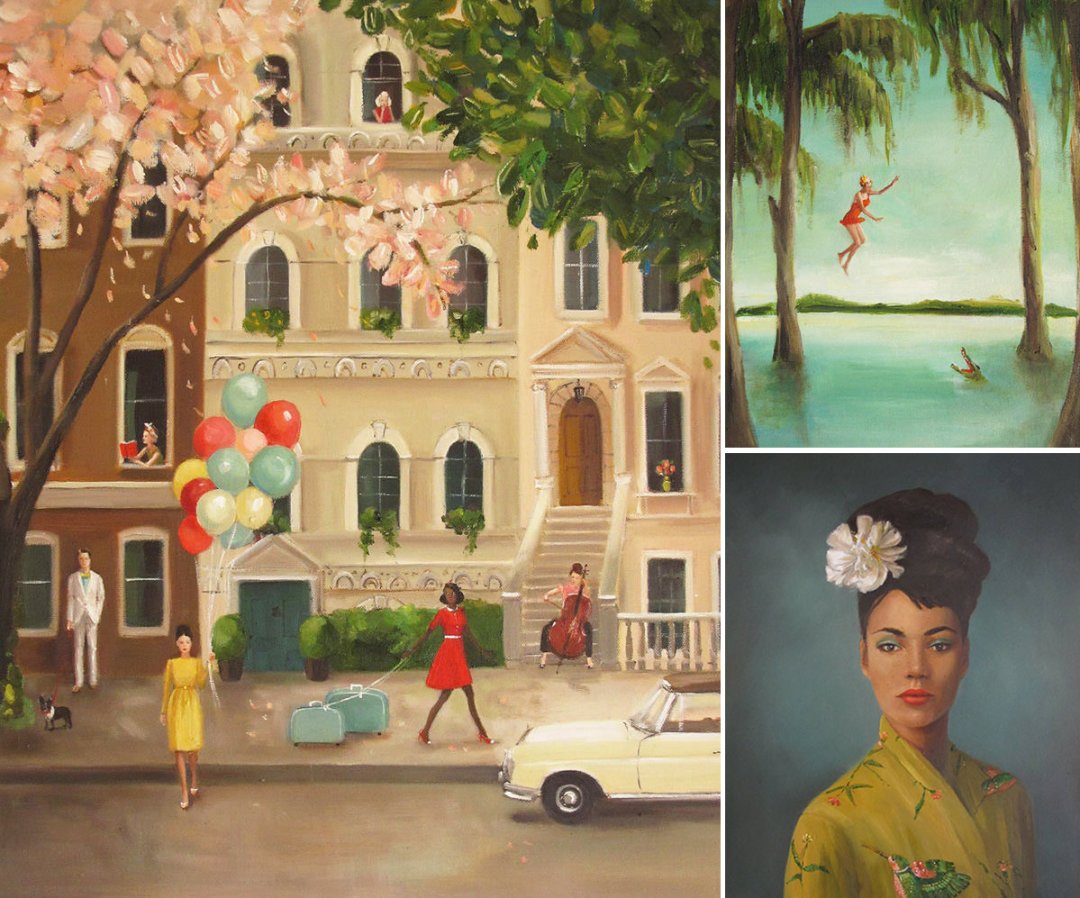 The first thing you notice about the women in Janet Hill’s work is their authority—and their interest in a world that does not include you. They may look off-frame. They may peer into another world. They may obscure your view of what they see. Or they might stare you down. They are often also contending with some level of distress. “I tend to depict women in the midst of dealing with absurd and sometimes precarious situations—falling into quicksand, battling crocodiles, or kidnapping a potential suitor,” Janet says. “But they always handle their individual predicaments with dignity and style.”

The artist, who lives in Stratford, Ontario, says that her previous work was based more in fashion illustration, a viewpoint that’s expanded to become more character-rich and political. “I focus on women in my work because I feel that we are still underrepresented in art—not in the sense of the female form, but in the sense of who we really are,” she says. “I’m interested in exploring strength, happiness, whimsy, and independence.” 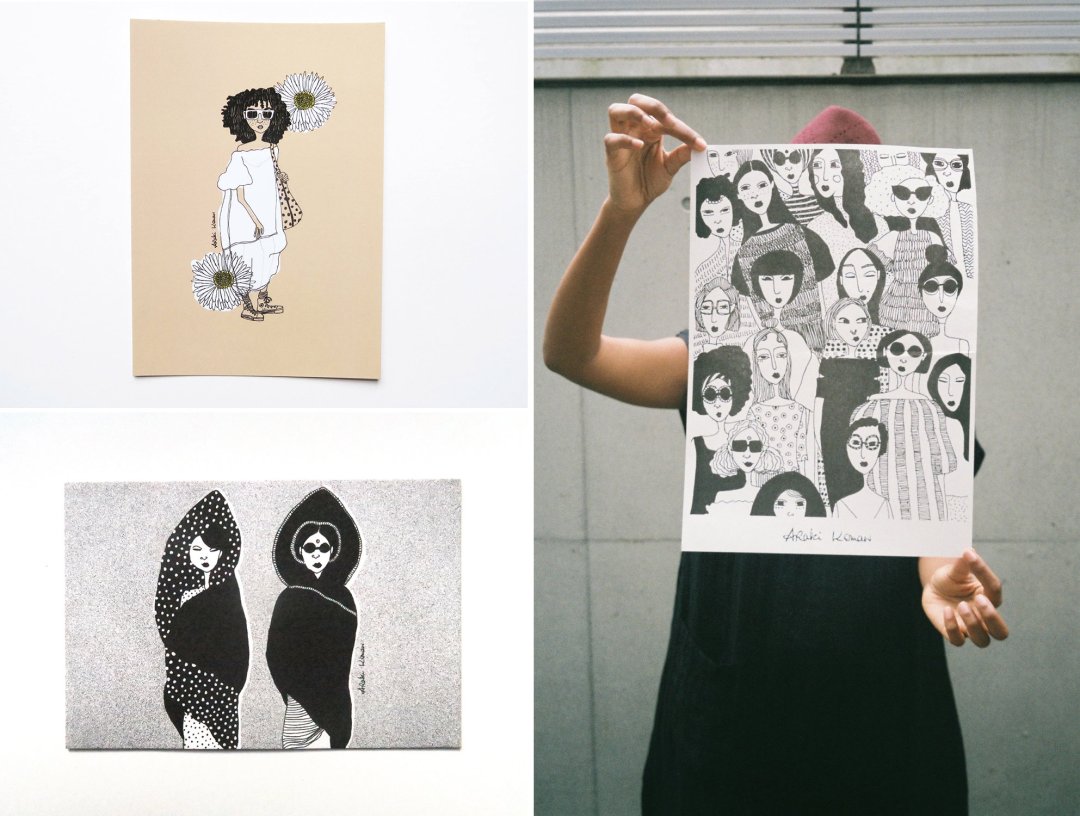 “Growing up, I had a poor level of self-love and confidence, and I used to draw sexy women with more prominent body features than I had because I thought it was the only way to be beautiful and feminine,” says Araki Koman, a Parisian based in London whose clients include top advertising firm Wieden + Kennedy. “Today my perception of beauty has completely shifted—I now draw women with unique and authentic features, sometimes raw and imperfect—yet comfortable with who they are.”

That aesthetic is amply on view in Araki’s work, which celebrates women’s innate individuality and strength—like this drawing of dance legend Martha Graham. Araki says her view of her own body has shifted along with her depictions of others: “I am now proud and happy to have small breasts and a never-flat belly. And I wouldn’t trade my boyish, oversized clothes for anything.” 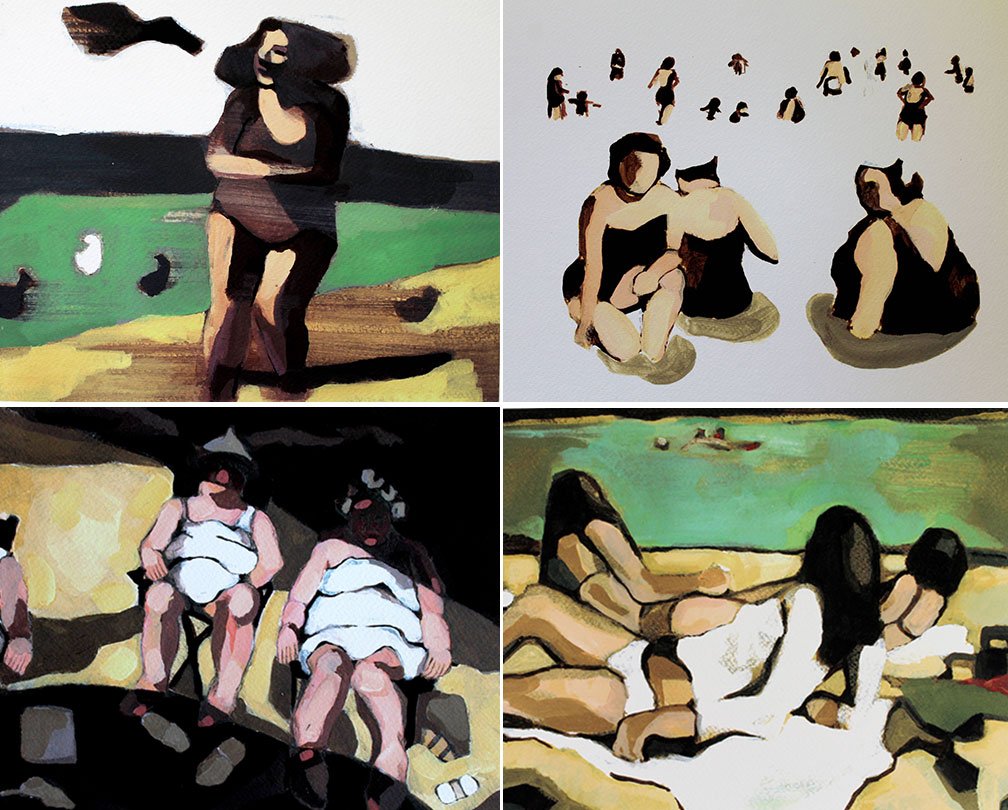 Even when they’re depicted in bathing suits, fine art painter Aliaa Essam’s female subjects feel intensely powerful: They are solid, grounded, some with thick waists and broad shoulders. They are beautiful and compelling, despite operating outside what we usually expect of half-clothed women in contemporary visual arts.

“I’m not attracted to standardized beauty—at least for the time being,” says the artist, who is Egyptian but lives in Switzerland. “I prefer normal woman, the ones you find in your daily life. I like chubby ones, I like old women’s wrinkles, girls with unusual facial expressions. And from a technical point of view, the lines of women’s bodies are appealing to me—the curves, the irregularities, the colors. The ladies that inspire me have their own flaws.” 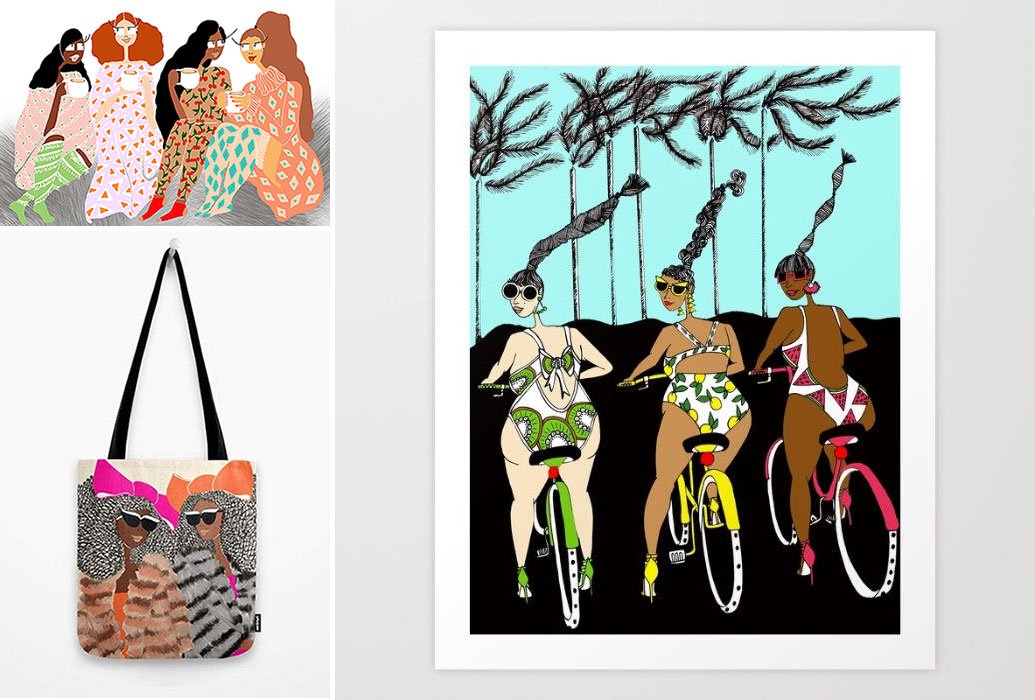 Native Brooklynite Karina Daniel Parris describes her viewpoint as unabashedly girly: “I grew up mostly around men, so whenever I was around women I saw how much fun it was to be one,” says the artist, whose work showcases women with exuberant style, wearing billowing dresses, on-point accessories like oversized sunglasses and jewelry, and must-be-seen makeup.

After beginning by drawing family and friends, her field of interest has grown. “When I first started to create Lovely Earthlings, I mostly drew girls that looked like me and dressed like me,” she says. “Now I draw girls that I see around me. They’re particularly inspiring to me because of their unapologetic lifestyle—they do what they want and dress how they want, and it’s beautiful.” 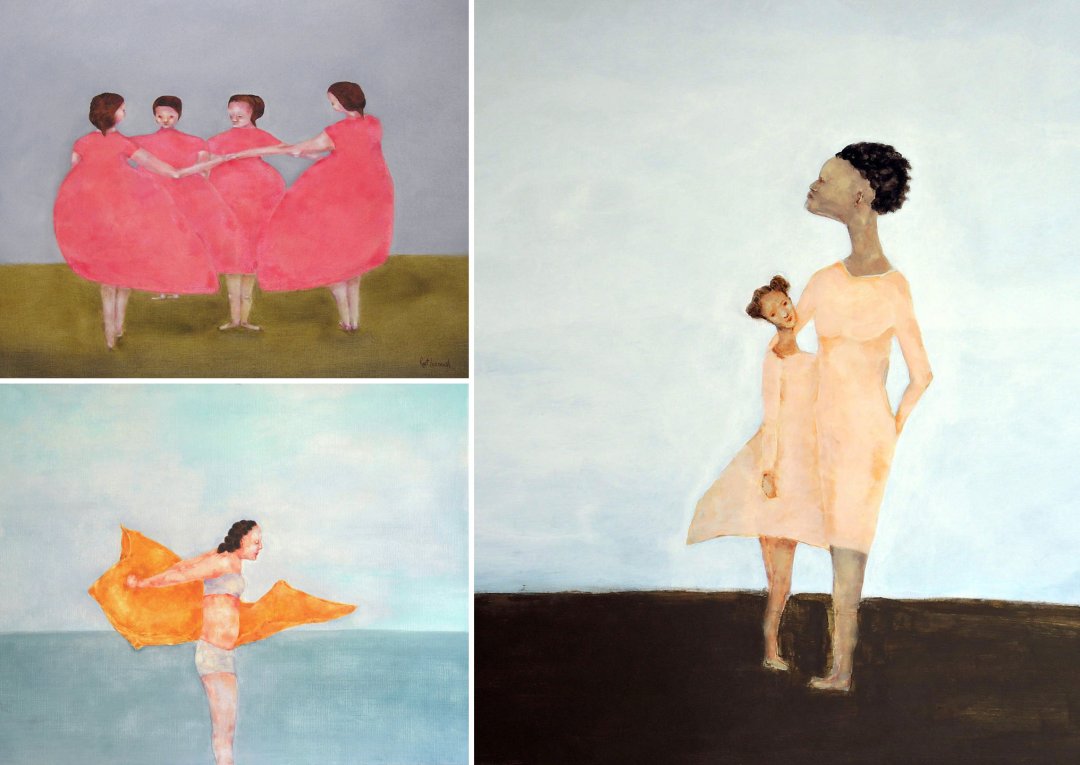 Kat Hannah of inapaleplace’s entry point for exploring the lives of women in her painting was portraits of mothers and daughters. “That evolved into a celebratory depiction of women in narrative tales,” says the artist, who lives in Philadelphia. Now her subjects confront a strange, mystical world—like this woman, shown in a boat, whose predicament is made clear in the work’s title: Over the Side. “My figurative works, at times bittersweet and reflective, are much like the defining events in all of our lives and are caught in the moment between things and places,” she says.

Despite the peril evident in much of her work, Kat says her intention isn’t to showcase this danger but to highlight her subjects’ determination to conquer it—“to demonstrate their sense of centering or their ability to conquer adversity.” She says: “The hope is that the viewer will experience kinship, solidarity, and a sharing in the human spark.” 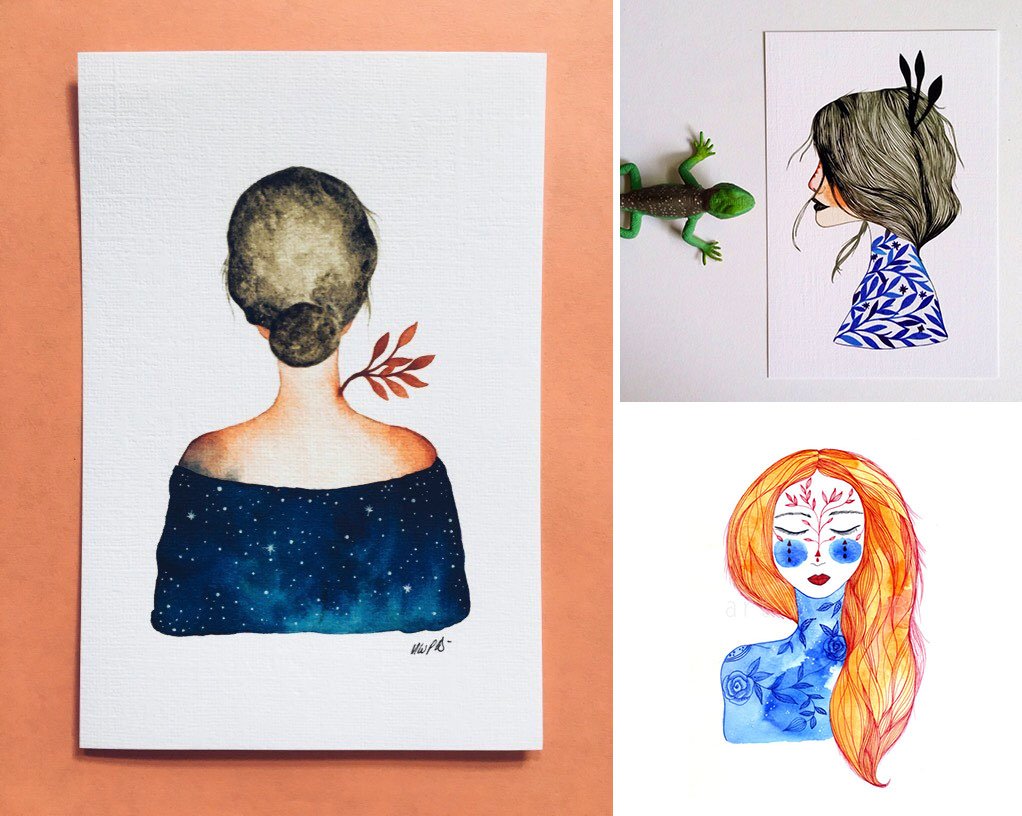 Nods to the natural world are a consistent presence in the work of Puerto Rican artist Nieves Waleska Pumarejo Blanco of Toshisworld: an anatomically inspired heart blooms with flowers, a “tiny galaxy” is encircled by a garland of leaves. Her latest work adds depictions of women to this landscape: One wears a necklace made of vines, while another subject seems to have entwined herself so thoroughly that it is no longer possible to see where she ends and the foliage begins. They are no longer just women, Nieves says, but “beings connected to nature and the unknown—and also connected to themselves to find their own voice, their own strength.”

They take their inspiration from women close to the artist. “I grew up with my mom, my aunt, and my mom’s friends—all of them single—so the masculine figure was more like a ghost, someone who appears and disappears,” she says. “Since childhood I’ve drawn women because they were my role models—the only figures that I know well.” Their central appeal to her as an artist, she says, was their power. “I think women have a great power and wisdom to change and heal—not only themselves, but an entire society and world.”

Diana Keeler is an Etsy shopkeeper based in Paris. She is currently traveling around the world, an expedition she is writing about on Faraway Places. She interviewed Ryan Gosling three times in one year. Find her on Instagram and Pinterest.

The newest crop of popular picks.

Planters, tea sets, wall decor, and more: Explore all the breathtaking ways makers are putting their own stamp on this versatile material.

A room refresh is just a print away.