For anyone who celebrates Christmas (or just embraces seasonal decorating), there’s a familiar ritual that takes place every year—whether it’s the day after Thanksgiving or just before the first out-of-town guests arrive. It involves the taking down of boxes, the careful unpacking of items (some fragile, some not), and finally, the thoughtful display of beloved trinkets that will fill a home with festiveness for the remainder of the year. From ornaments to miniatures, Etsy is a veritable wonderland of Christmas collectibles—many of which are vintage. Read on to discover the stories behind a few of our favorite old-school finds. 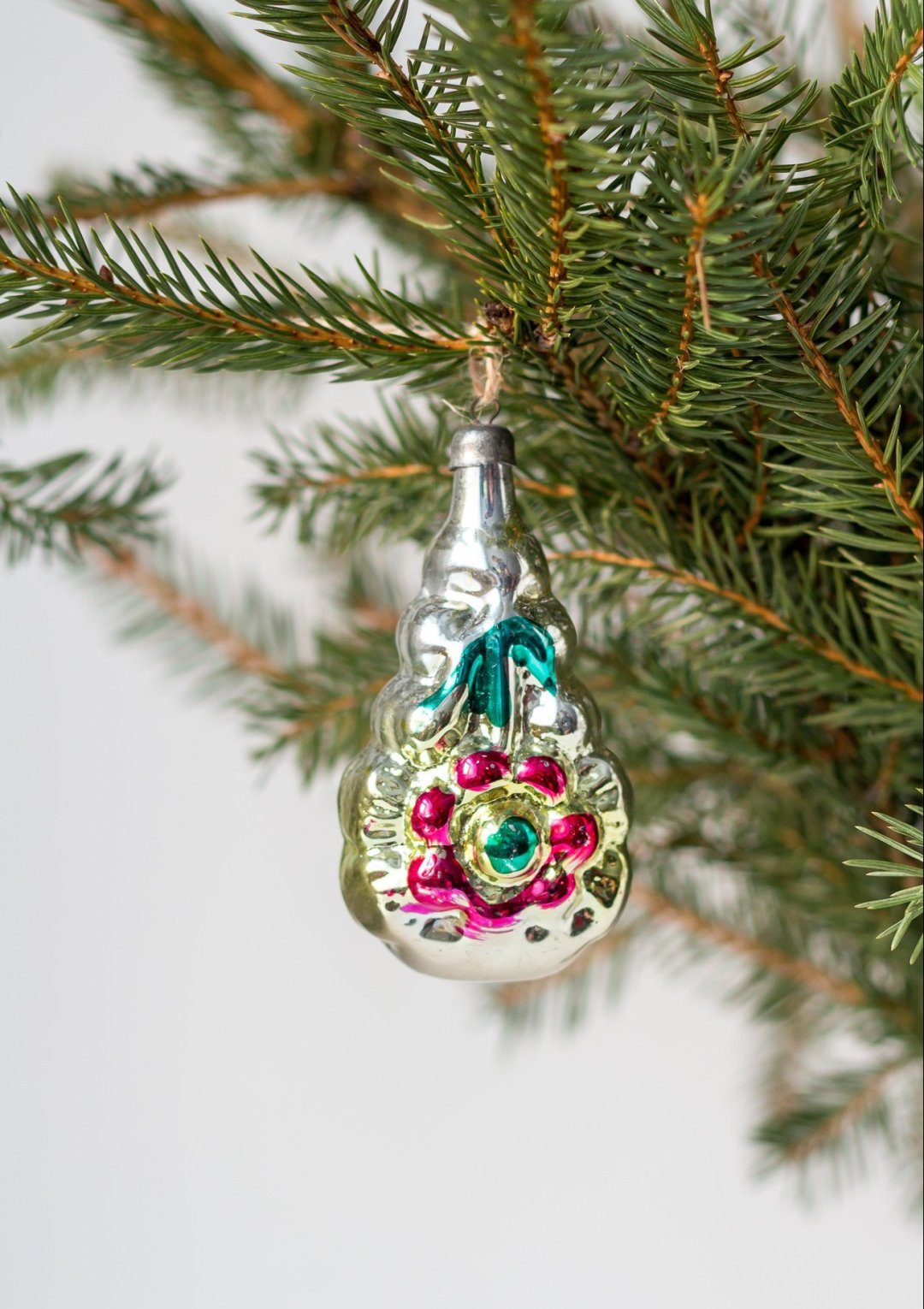 Mercury glass—which doesn’t actually contain mercury—first rose to popularity in early 19th-century Germany as an inexpensive substitute for silver. Composed of double-walled glass filled with a silvering formula, the style, which swept Europe, was used for all sorts of housewares in the hopes that a thief would mistake it for the good stuff. Mercury glass went out of vogue with the advent of the light bulb (which eliminated any chance of a thief’s misidentification), but came back in the 1900s and swept the Christmas decor scene. Colorful mercury glass ornaments, especially the dioramas, had their heyday in the 1950s and ’60s, and like many other decorative and design elements of that era, have enjoyed a revival in the last decade. Now, collectors and crafters are even combining the tiny vintage ornaments into big, statement-making multicolored wreaths. 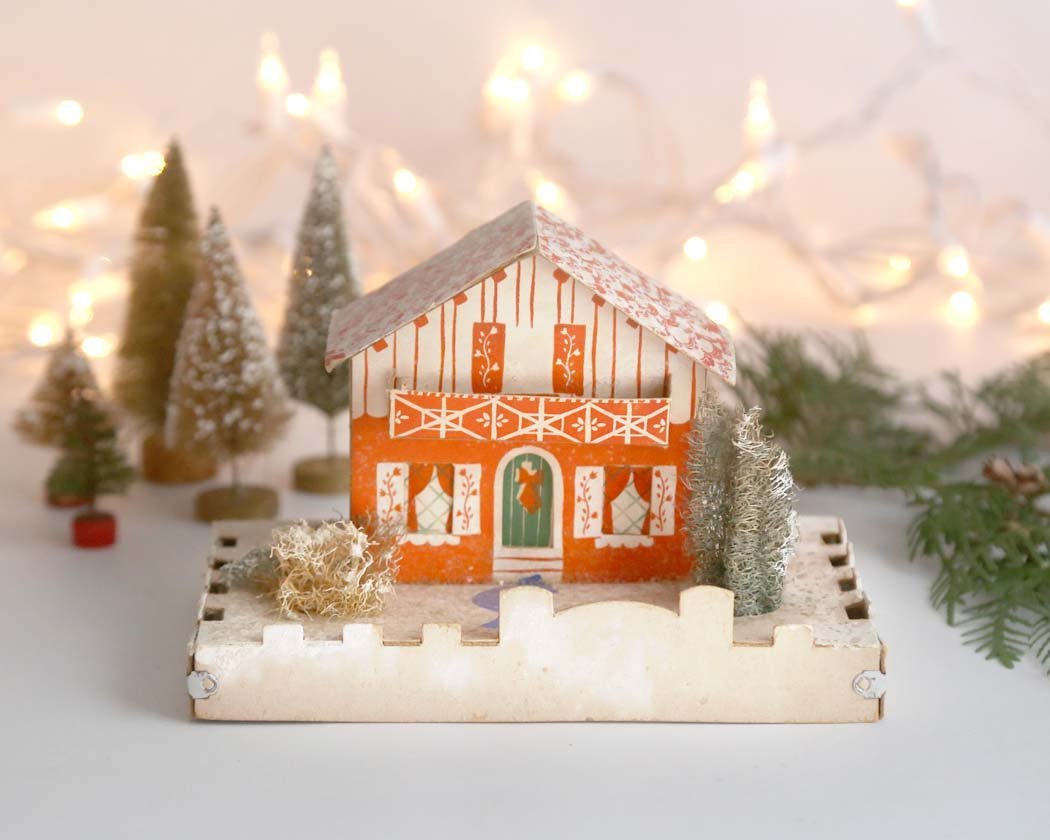 Tiny Christmas villages are one of the holiday’s decorating mainstays. Nicknamed putz houses, a German word that translates loosely to “putter around” (’cause that’s what you do, putz around with the trinkets until they’re just how you want them), the tradition began with wooden houses or house-shaped candy boxes from Germany. But with the introduction of holiday string lights came a new kind of putz house, straight from Japan (where much of America’s Christmas decor production shifted after WWI). In the late 1920s, Japanese designers created simple cardboard houses with holes in the bottom for the lights to go through, illuminating the houses’ cellophane windows. Putz house proliferation, at least in Japan, died out when WWII began, narrowing the collectibles’ peak popularity to just about 10 years. But recently these cardboard villages have found new life, inspiring makers to design their own modern DIY kits, like this retro-style Christmas camper. 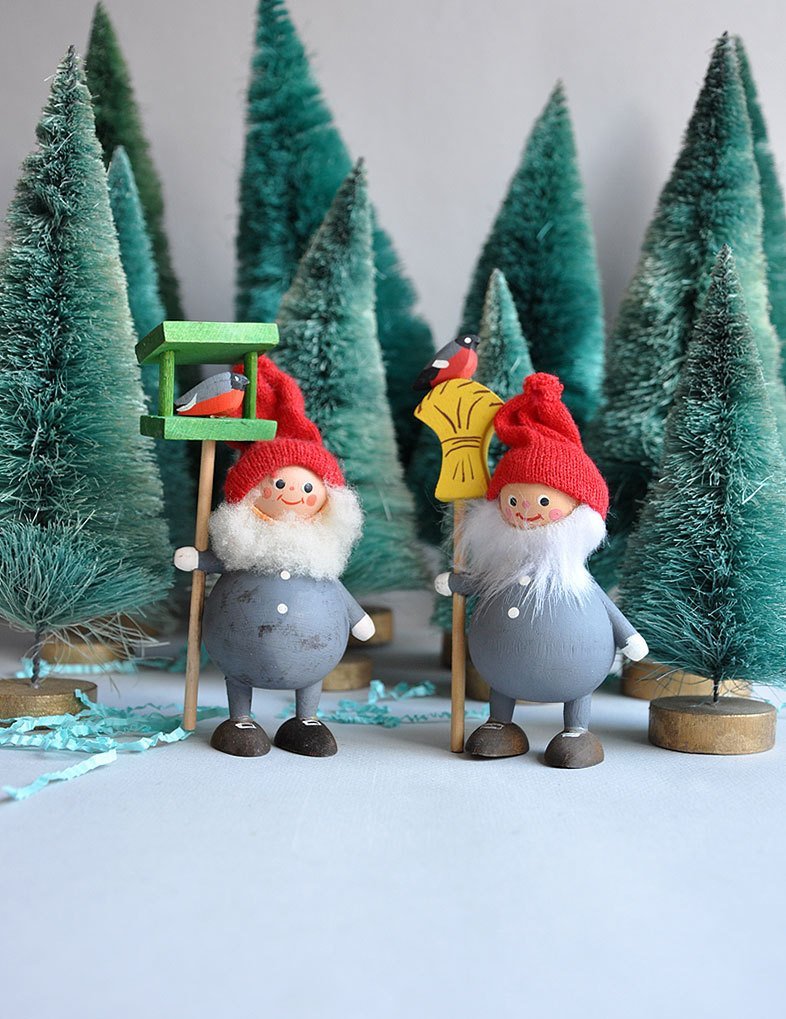 Long before Americans had Santa Claus, Swedes had tomtes: garden gnome-like creatures associated with the winter solstice. After an 1881 Swedish magazine published a poem about a tomte alongside a painting of the small folkloric figure with a long white beard and a jaunty red cap, the modern tomte was born (influenced no doubt by the rising Father Christmas craze); now he’s the one who brings gifts to Swedish children on Christmas Eve. As such, tomtes are incredibly popular when it comes to Christmas decor, and you can see their likenesses immortalized on linens and rendered in wood, needle felt, and even little clay sculptures—the smaller the better. 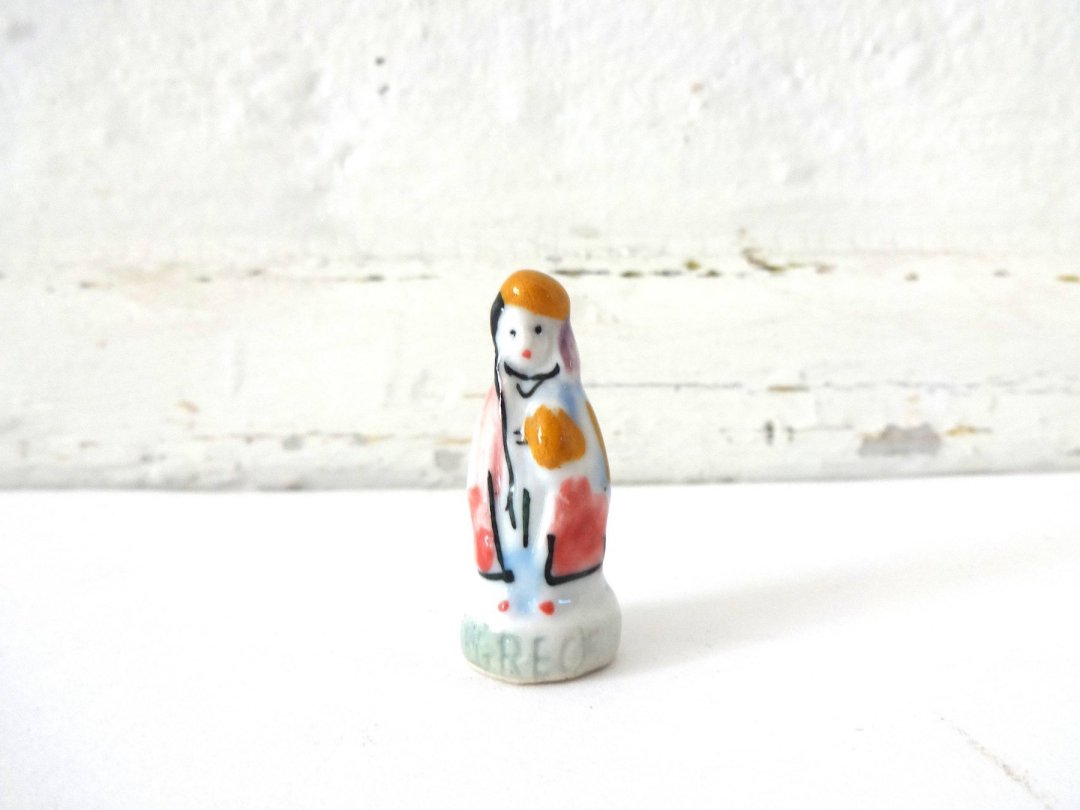 Of course, if you’re looking for something really miniature, there’s no better place to start than with French fèves. In France, January 6th is known as La fête de l’épiphanie, or the Epiphany holiday, believed to be the day the wise men came bearing gifts for the baby Jesus in Bethlehem. To commemorate the occasion, a cake is baked and a bean is hidden within; whoever’s slice has the bean is king for the day. In the 1940s it became popular for a king cake to house a small, hand-painted ceramic figure known as a fève (bean in French), instead. The tiny figures, clocking in at under 2 inches, often make up a nativity scene, but also come in more surprising forms: a troupe of circus performers, say, or even Disney characters. In 2010 French couture designer Christian Lacroix even designed a set of regally attired fèves for the famed French bakery Ladurée—what better proof could there be for their continuing appeal? 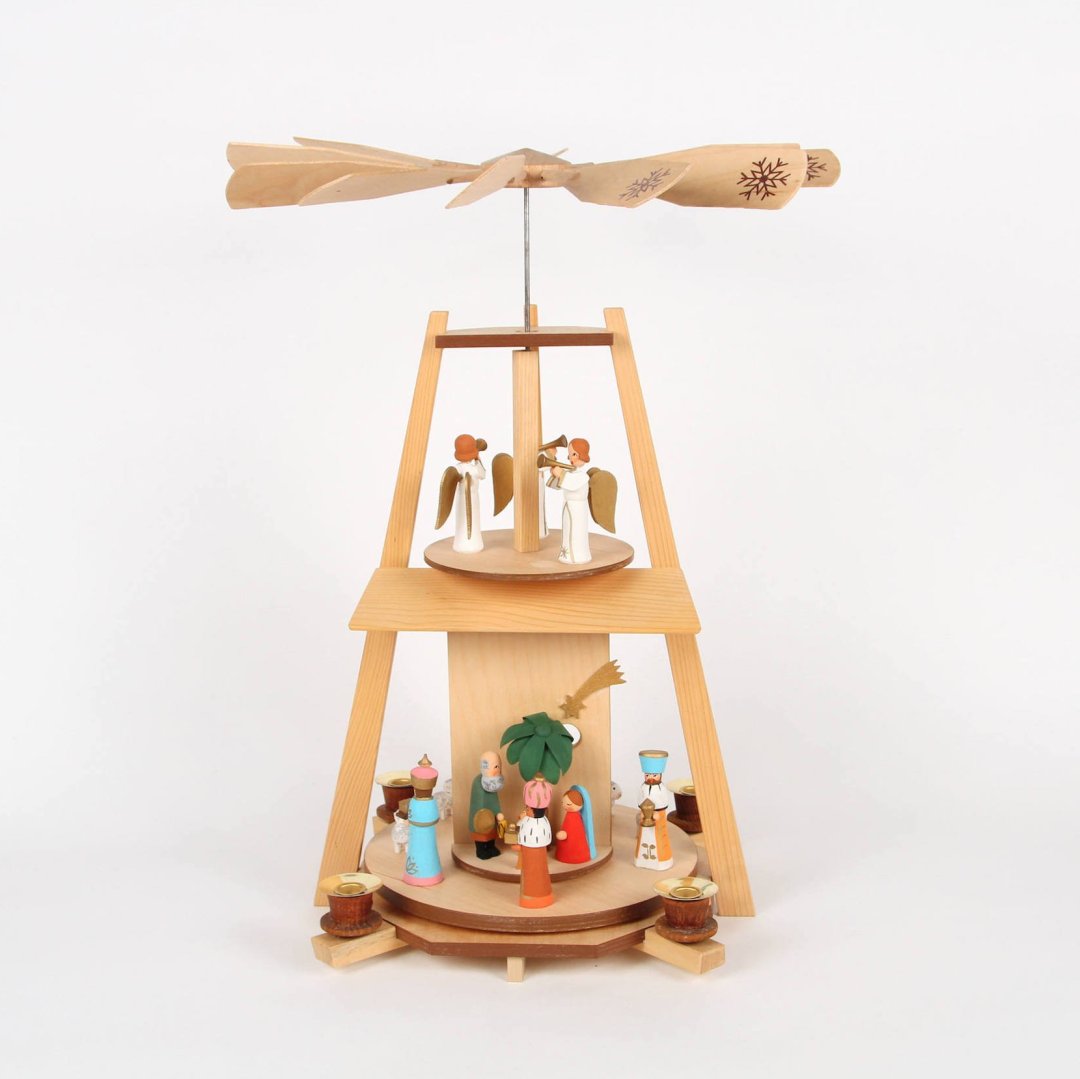 Like many Christmas decor traditions, Christmas pyramids originated in Germany, and are thought by some to have paved the way for the Christmas tree. The origins of these propeller-topped wood carousels, which were powered by the rising heat from candles set into the base, date back to the 18th century. Christmas pyramids, commonly depicting nativity scenes, got even more popular in the 1830s thanks to the invention of kerosene (a much cheaper replacement for the costly candles used before). Despite the ubiquity of real Christmas trees today, the pyramids are still incredibly popular, having changed very little since the 1800s, and larger-than-life versions (several stories tall) are constructed in the central squares of towns in Germany’s Ore Mountains each year at holiday market time. 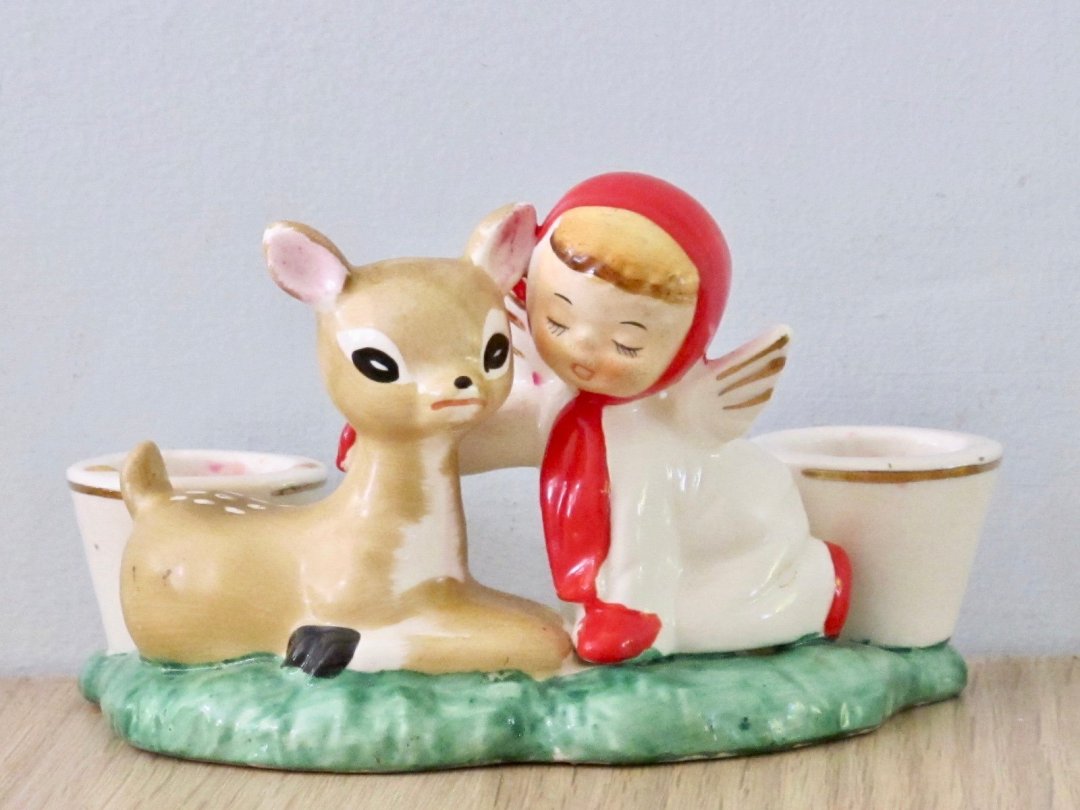 While living in Sweden in the 1940s, American A. Grant Howard was struck with entrepreneurial inspiration when he saw how much the Swedes loved their Christmas decorations. When he returned home, he teamed up with two of his college buddies, brothers Bob and John Howard, and together they launched Holt Howard Ceramics. Their whimsical Christmas tchotchkes—which included winking Santa mugs, seasonal cookie jars, and hand-painted ashtrays—were must-haves for hip mid-century couples. And it’s easy to draw a through line from vintage Holt Howard to the ceramics craze we’re seeing today: many quirky pieces from contemporary ceramicists, like these adorable storage jars from Ryaba Vosh Ceramics, have the Holt Howard spirit at heart.

Editor’s note: This previously published post has been updated with fresh product picks for the 2018 holiday season.

Lisa Butterworth is a writer and editor soaking up the eternal sunshine in Los Angeles. When she's not on the hunt for the latest and greatest in girl culture as the West Coast editor of BUST magazine, she's flea marketing, taco trucking, and generally raising a ruckus.

Decorate Like You Mean It: Etsy’s Ultimate Ornament Guide

Get in the seasonal spirit with tips from our favorite tastemakers and a collection of cheerful Etsy items hand-picked to help you find your festive.

How to Style a Festive Front Door for the Holidays

With a few simple, rustic touches you can create your own warm and welcoming entryway with cozy log cabin vibes.